You must have noticed something (and if you haven't you'll thank me I have... :P )
你一定注意到了（如果没有的话你应该感谢大爷我…:P)

on page 22 in the booklet (that's in the Equity, Earnings, and Growth Rates lecture) there is a problem (#4)  about a company called Ceduna Co.
A) says :calculate the geo and arithm. means for the g. If you've noticed in the example he does in the lecture he only uses the observations prior to the occurrence of negative EPS (that's on page 2 in the same lecture). So he takes the avg. of the g's prior to the (0.11). The question is: do we do the same in the ceduna problem? If we do that we're only left with 3 g's to take into account (from 2006 to 2009 when the (69) occurs). I don't see anything historical in calculating an arithmetic g based on only 3 observations. His example is rather "convenient" and has a long string of observations before that.
Second of all, f) asks us to estimate the modified g's. So far, so good, but if you pay attention to what he does in the example, he only calculates the modified g's for the negative EPS and the ones after that and COPIES the historical g's in the modified g's column for all values prior to the occurrence of the negative EPS !!! Does he expect us to do the same thing or really use Arnott's formula as the question says...?!? (because the answers are VEEEEry different in the two scenarios).
（学术问题，略…）

I sent him an e-mail last week and I got a response from a totally different person that he is attending some family health issue problem somewhere and "will probably not check his e-mail". Guess what... He didn't. So don't bother asking why I didn;t ask him because I DID.
我上星期给丫（注：咱老师）发了封邮件，（略）…你猜咋的，丫没回！所以别问我为啥有问题不去问他，我问了！

I am ready to hear/ see you interpretation of this "problem within the problem"...
好吧，我已经准备好听你给我解答了。 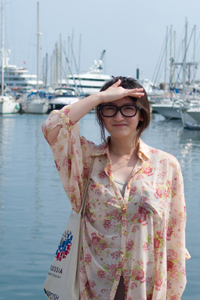